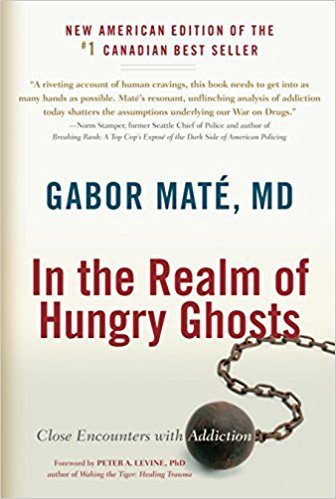 According to one definition, “Defined by a fusion of rage and desire, tormented by unfulfilled cravings and insatiably demanding impossible satisfactions, hungry ghosts are condemned to inhabit shadowy and dismal places in the realm of the living.”

The concept of Hungry Ghosts has been present in Buddhist, Taoist, Hindu, Sikh and Jain texts. They are said to be “the remnants of the dead who are afflicted with insatiable desire, hunger or thirst as a result of bad deeds or evil intent carried out in their life times.”

Karma stuff aside, the metaphor of addiction as a Hungry Ghost, though seemingly very harsh,  seems apt (and has been used in the title In the Realm of Hungry Ghosts by Gabor Maté —a book about addiction). Addiction might seem like some kind of a demon possessing us that is insatiable, demanding impossible fulfillment. Being addicted seems insane, threatening our very happiness and every instinct of our survival over and over. Some people afflicted by addiction will say, “There wasn’t enough alcohol/ drugs in this world to satisfy me.” Others will claim to have thought nothing about selling their mother only to get their next fix, and many have lost custody of their children to addiction, their homes, their jobs, and everything else in life they held dear.

The losses are tragic and seem impossible to deal with, and one way of dealing with them is to simply not deal with them. Going back to the addictive substance, numbing, checking out—all of that temporarily erases whatever worries a person with substance abuse disorder has. Once high, stealing, cheating even lives don’t matter. The absence of children is not that big of a deal, it’s fine to sleep in a park, and having a job is for chumps. Under the influence of addiction, nothing matters. Only scoring more, getting more alcohol. The ghosts are hungry and you must feed them. But the illusion of satisfying the ghosts/ cravings and deleting the world is temporary. The high doesn’t last and the feeling of satisfaction is gone almost as soon as it shows up. The ghosts remain hungry, and when you’re in your active addiction, they are inside you and they will never be satiated – so the cycle continues.

Maté wrote, “The addict is never satisfied.  His spiritual and emotional condition is one of impoverishment, no matter now much he achieves, acquires, or possesses.  In the hungry-ghost mode, we can never be satiated.  Scruples vanish in the face of addictive ‘need’ – hence the ruthlessness.  Loyalty, integrity, and honor lose meaning.”

Active addiction is that “hungry-ghost mode,” and the only way out is to starve the hungry ghost. You do this through recovery. But it’s not as easy as making a decision or a choice—many of us are not equipped to make those decisions or choices because of our circumstances. Whether because of our environment (homelessness, being surrounded by other people with substance use disorders) or because of trauma or other emotional condition, we might not be able to muster that superhuman effort to fight and starve the ghosts. This doesn’t mean that we should give into our circumstances. It “just” means that some of us might have a harder time recovering and will need more help. A person with substance use disorder has poor chance of succeeding if there isn’t a community involved in helping him or her. That community can be the person’s family, their friends, and their accountability partners.

Though it can be an uphill battle, even more so because of the way addiction is portrayed in the media (but we are years away from reducing that stigma), and a person with substance use disorder needs a lot of help, they also don’t need much. They need love and understanding and support.  An army of people against hungry ghosts is better than one weakened victim of addiction. It is not impossible to win this war.