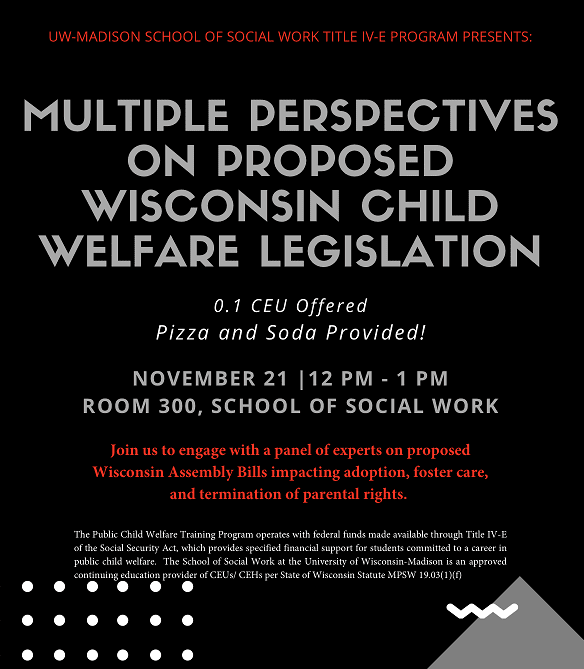 I was honored today to be included in a panel discussion regarding the eight (8) proposed Wisconsin Assembly Bills impacting adoption, foster care, and termination of parental rights. 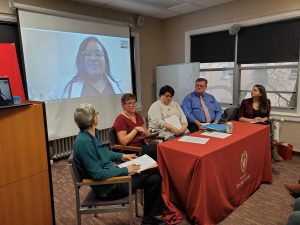 The question I was asked was:

As you listen to this discussion here today, what are your thoughts about how the child welfare system and/or adoption impacted your life? Do you have any thoughts about the process of writing these Bills, or their content, and the changes they may bring?

The testimony I offered is as follows:

The child welfare system at the time I was adopted was very different from what it is today. In 1960, nearly 25% of pregnancies of white females in the U.S. resulted in relinquishment. It was assumed that a single white female would surrender her baby, and hundreds of thousands of young women were sent away to maternity homes (including my birth mother), many of which urged them to use fictitious names. Shame and secrecy, and in many cases, coercion, dominated the culture.

Wisconsin’s law has remained tethered to those roots to this day. I, like generations of adoptees, was raised in a cultural and psychological limbo. I was a “chosen” baby, and at the same time, someone’s dirty little secret. Adoption policy was, and in at least half the states continues to be, viewed as a one-time event that produces a win-win-win for everyone involved. When I say win-win-win, the short-sighted belief went something like this:

Records were sealed to prevent the relinquishing parent from trying to reclaim the baby and to “stabilize” the adoptive family. Today some people still wrongly assume that it was to protect the birth mother from being found by her own offspring. In short, the system that I and millions of adoptees have experienced was, however well-intentioned, largely short-sighted, and unhealthy.

The impact on my life personally was profound – enough so that I dedicated many years working through my relinquishment and adoption, and wound up writing a book about what I learned. The abridged versions is as follows: Because I never felt like I fit in anywhere, including my family, I struggled significantly as I grew up, particularly with shame, though you wouldn’t necessarily know it to look at me, as I was a master of survival through adaptation. I happened upon alcohol in my early teens for what I assumed was teen angst and social awkwardness, but was really a solution to a much bigger problem, that of difficulty attaching in relationships and having no ego strength/ healthy sense of self. Alcohol became a prescription for my inability to feel connection and a sedative for my overly-active mind that kept telling me that something was inherently and shamefully wrong with me – after all, I was given away – that was proof enough.

What was initially a medication turned into a poison, and I pursued that magic elixir with a fervor for many more years than I’m proud to admit and with progressively disastrous results. It wasn’t until I was able, with assistance, to stop using alcohol that I was able to develop a cohesive narrative about my life and develop a healthy sense of self. This was aided in no small part by a decade-long search for information about my birth family, ultimately culminating in me learning genetic information after petitioning the Wisconsin courts for my adoptee file from the Department of Children and Families, and meeting several half-siblings and cousins, as both my birth parents had passed.

With regard to the specific Bills -These bills have arisen out of the work of the Speaker’s Task Force on Adoption, with a directive to streamline the process and help waiting children find loving permanent homes.

The long-term struggle to form healthy adoption policy, especially with respect to termination of parental rights (TPR), rests somewhere in the tension between “family preservation” and “the best interests of the child.” On the one hand, we understand that separating a child from parents is, without exception traumatic. However, if the home situation has become dangerous to the child, and if reasonable efforts to help the parent(s) deal with issues of violence, addiction, finances have been exhausted, or the parent simply wants to step out of their role as parent, then statute should not force a child to unreasonably languish in the system without a stable, loving, permanent home.

Wisconsin proudly states that it offers robust resources to assist single mothers and help parents struggling with addiction, and I encourage lawmakers to continue to look for ways to keep families together whenever possible. Then, we need to focus more resources on adoptees.

One related bill of great importance to adult adoptees, which did not stem from the Task Force, is AB 579 and its Senate companion SB 521. The bill would provide adult adoptees with a “report of adoption.” I’m not sure exactly what this report would look like, or what information it would contain, but I and other adult adoptees would urge the sponsors to include a small but significant amendment specifying release of an unaltered, unredacted copy of the original birth certificate to the adult adoptee, their descendants, or legal representative. Governor Cuomo just signed a similar bill for unfettered OBC (original birth certificate) access in New York, aligning with a national trend. Truth and transparency in adoption is better, healthier policy than shame and secrecy.

Adoptees, including adult adoptees, deserve equal access to information about their origins, and states are recognizing the need to bring balance to their statutes. I also hope the State that I was born in, relinquished in, adopted in, and live in will take this additional necessary step to provide truth and transparency to adult adoptees.

Thank you for your time and attention.