When I first started going to Alcoholics Anonymous meetings, I did feel a strong sense of belonging. In the meetings, I heard people talk about things that I thought were only specific to me and my “twisted” way of seeing the world: sharing distressing thoughts that I believe only I was capable of, expressing fears that I was sure nobody else have felt, discussing vulnerabilities that I thought were unique to me. My initial experience with AA was a mostly positive one. I’ve found camaraderie and I’ve found support. I’ve found like-minded individuals and I felt less alone. This was crucial to my recovery to feel less alone and like I belonged somewhere. It helped me deal with the shame I’ve had over drinking and how that was ruining my life—there were others like me who had done similar things and who have had the same feelings and who have gotten better despite all the odds!

But this is not a story where we all lived happily ever after. As time went on, I’ve found myself getting alienated in meetings because I did not believe in god and I’ve also found a lot of AA “teachings” to be judgmental, difficult to digest and, frankly, shaming. The more sober I got, the more my eyes opened to the fact that the place that I considered Safe and an answer to my woes of not-belonging was not ideal in any way. Interestingly, I’ve always heard in the rooms of AA about how welcoming it was and how people were finding that instant connection, validation… how the rooms were full of laughter and joy. The members were like the “drowning clinging onto the same lifeboat”—a sentiment that was often repeated in different forms. 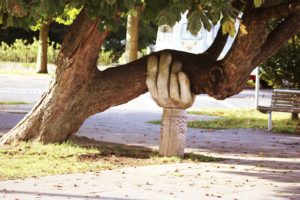 Photo by Neil Thomas on Unsplash

Maybe. Maybe for some it was like that and it remained like that throughout their sober careers. I believe that there is a small percentage of AA members that indeed walk into their first meeting and find paradise and it is exactly where they recover and flourish and improve their lives. The problem is that this is the ideal. And AA is not The Ideal. With only about 5 per cent of the people who go to AA staying in AA, that connection is not felt by most. And when some of us with relational interruptions cannot connect, we feel further defective. So a person like me, who is dealing with other trauma (of having been relinquished) and who has a fundamental core belief—I do not believe in god—that goes against the fundamental core belief of the organization itself, is not going to find a permanent home in a 12-step meeting. I think it’s important to acknowledge that AA might not be for everyone (same with other places of recovery such as SMART meetings—this is not me necessarily picking on AA). The solution to this disconnect is not to despair and give up on recovery all together, but rather continue looking for places that will nourish you and support how you are evolving in recovery. For some it might be going back to church (hey, some of us are too religious even for AA!), for some it might be finding recovery online, for some it might be therapy, and so on.

The illusion that AA is some kind of a Recovery Disneyland is just that—an illusion. The reality is that it’s okay for people to change their minds about how to help themselves stay afloat (and yes, that means sometimes by letting go of that AA lifeboat, too if it’s getting too weird and crowded over there). Our responsibilities are first of all to ourselves and to our loved ones. And as human beings it is in our nature to question and challenge situations that make us uncomfortable, and it’s our ability to improve our situations that make us evolve and thrive. Don’t drink the Kool-Aid if it tastes bad, keep looking and have hope for yourself—you are not alone in your quest and everyone, even an AA deserter deserves good recovery.